Sinkholes, Their Formation, and Estimation of Vulnerable Areas

Sinkholes, a common geomorphological phenomenon in the Dead Sea area, are localized features of surface subsidence. This includes open collapse structures forming suddenly during collapse events. The largest collapse sinkholes are about 30 m in diameter and up to 15 m deep. Sinkholes may threaten vital infrastructure, such as roads, buildings, pipelines, and dams. The frequency of occurrence of sinkhole collapses increased strongly during the last two decades and seems to closely correlate with the Dead Sea drawdown.

Sinkhole-affected regions are characterized by a concealed fault system and subsoil coastal salt layers, which are in contact with groundwater or unsaturated brine. This suggests that groundwater, under-saturated with respect to the abundant easily soluble minerals, uses faults as conduits to percolate to the salt layers. The under-saturated water dissolves and flushes the salt layers, leading to a collapse of the underground substrate structure and, thus, to the development of sinkholes.

However, the stability of the soil structure as well as the locations of the faults serving as preferential flow paths and future sinkhole areas are unknown.

In WP1, a combination of various monitoring methods, such as shear-wave reflection seismics, ground-penetrating radar, InSAR, and aerial photography, will be used to identify and characterize areas of high sinkhole potential. Sinkhole and subrosion models representing geophysical, geological, as well as hydrological processes will contribute to the process understanding of sinkhole formation, in particular to identifying the stability of the soil structure, preferential flow paths, and salt dissolution. 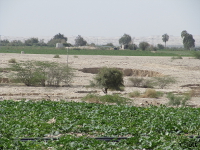 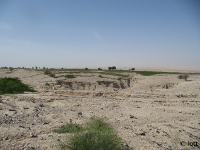