The DESERVE Weather Friendship is a trans-boundary meteorological monitoring network at schools in the Dead Sea area. By collecting and analysing their own weather data, the children learn about the weather in their region. At present, two school weather stations are installed in Israel, Jordan, and Palestine respectively.

The Dead Sea region is characterized by a strong climatic gradient. In the high altitudes, the climate is Mediterranean with relatively high rainfall amounts in the winter season. In contrast, the climate at the Dead Sea is arid year around – only few storms occur between November and March. Besides this spatial and seasonal variability, a land-see wind circulation exists in the Dead Sea region which is characterized by a sudden onset of strong winds in the evenings. This spatio-temporal climate difference impacts humans and nature in the region. The Weather Friendship has the aim to sensitize the schoolchildren to the role and influence of the weather on their lives as well as their environment.

The schoolchildren can verify their weather experience by the measurement of meteorological variables such as wind direction, wind speed, air temperature, humidity, air pressure, and rainfall. The data are recorded on an internet platform common to all schools participating in the Weather Friendship. With the help of teaching materials and units, the measuring principle and the operation of the individual meteorological instruments is explained. The schoolchildren will additionally learn the technical handling and maintenance of their school weather station. 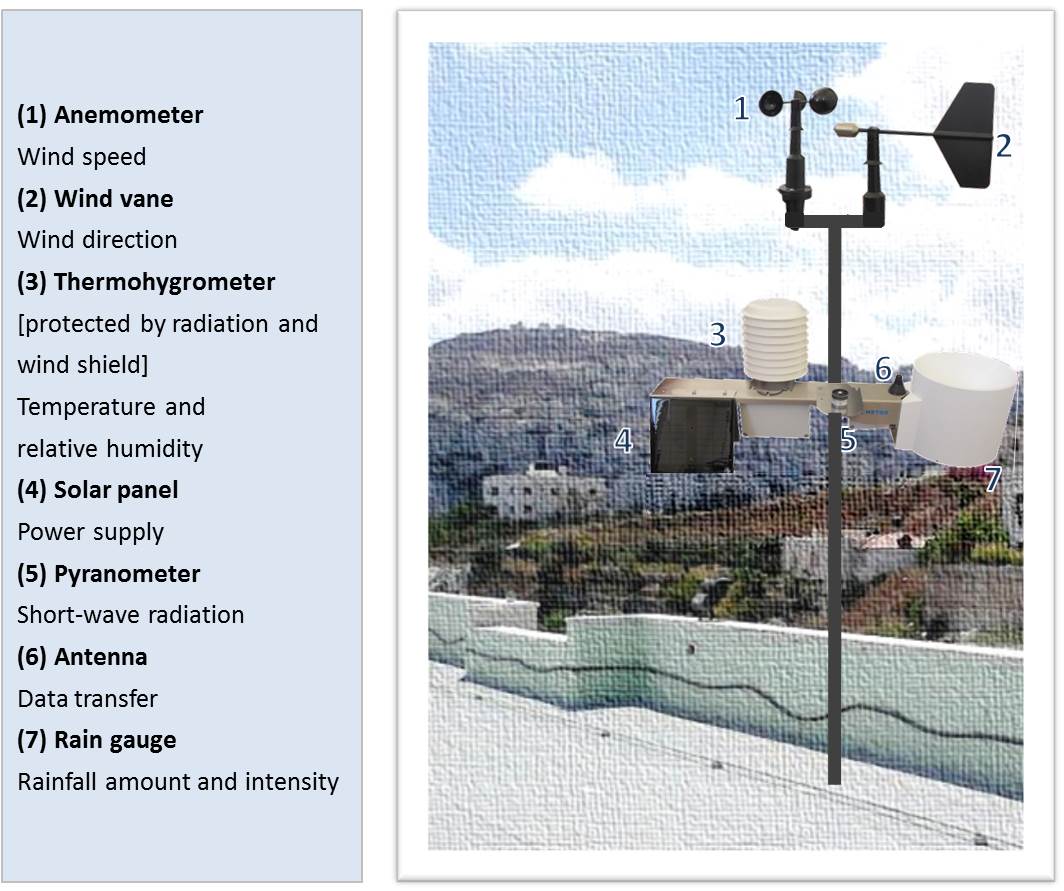 The collected weather data can be analysed by displaying them in form of charts and maps. The data can also be evaluated statistically by calculating e.g. averages and extreme values. The schoolchildren are familiarized with data handling both manually and electronically. Integration of the data analysis in the mathematical or computer classes is possible.

The theoretical knowledge of weather taught in geography and physics lessons can be verified and demonstrated with the interpretation of the created maps, charts, and statistics. Thus the schoolchildren establish a link between theoretical knowledge and practical measurements. In addition to their own measurements, the schoolchildren can access the weather data of the partner schools too and use them to analyse and interpret observed differences, similarities, and interrelations. Finally, the schoolchildren can communicate their results in the form of reports or talks to their classmates.

Exemplary weather data of Beit Jala Secondary School displayed from 21 March 2015, 11:00 to 23 March 2015, 11:00.
The upper diagram shows hourly values of air temperature in degrees Celsius [°C], relative humidity in percent [%] and air pressure in millibar [mBar]. On 21 March, the air temperature was greater 14 °C. During the night of 21 March it decreased to 4.6 °C and increased again on 22 March to 10 °C. The relative humidity shows a reverse behaviour compared to air temperature. The reason is that warm air is able to contain more water vapour (humidity) compared to cold air (low air temperature). Therefore, relative humidity increases when air temperature decreases. When relative humidity is close or equal to 100 % (saturation) at the earth surface, fog is likely to occur. In the atmosphere, saturation usually leads to clouds which can bring precipitation in form of rainfall, dew or snowfall. The weather station is only able to record rainfall (lower chart). The unit of precipitation is millimetre [mm]. This means that if the collected amount of rainfall, for instance 5 mm, would fall into a box with a base area of one square meter, the height of the water inside the box would be 5 mm. It can be observed that some rainfall occurred in the late afternoon and evening of 21 March shortly after an air pressure drop to 914 mBar. This, as well as the lower temperature on 22 March, strongly suggests that a cold front passed over this region bringing rain. Additionally, the lower diagram shows the daily cycle of solar radiation. The measured values are positive during the day when the sun is shining, and they equal zero at night. The highest values can be observed around midday when the sun reaches its highest position above the horizon. On sunny days the curve is smooth and is shaped like a bell. However, on cloudy days it is flattened and whenever a cloud passes in front of the sun the curve shows a dent. The wind direction indicates the direction from which the wind is blowing. It is measured in degrees [°]. 360° means that the wind is blowing from the North. 90° indicates that the wind is blowing from the East, 180° from the South and 240° from the West. 0° indiactes that no wind is blowing (calme). Figure by http://fieldclimate.com/.

Get connected by the weather

Across political boundaries, the Weather Friendship can awake interest in meteorology among the schoolchildren of the Dead Sea region and enable them to get in touch with each other via the agent weather. 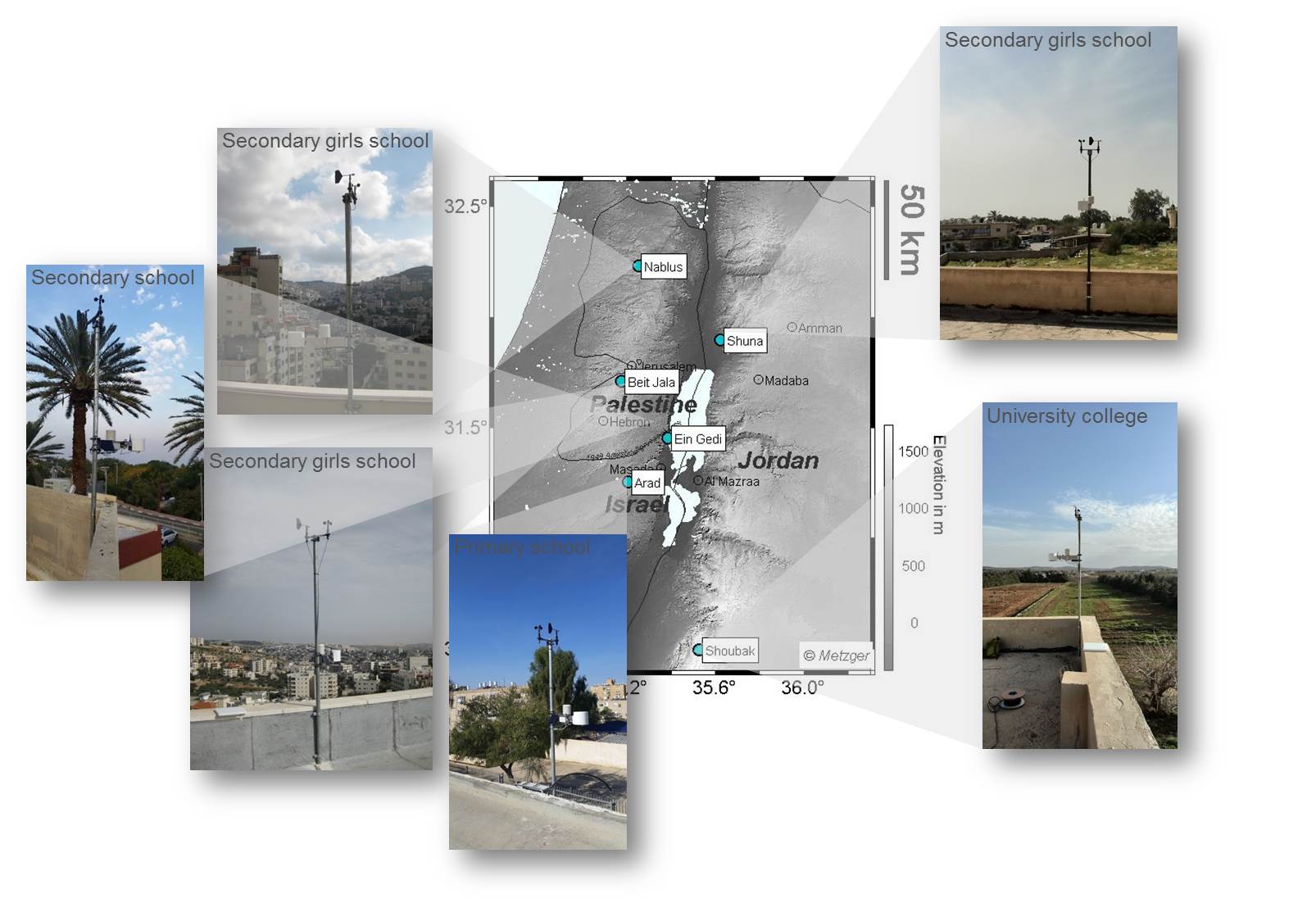 Have a look at the current weather:

The DESERVE Weather Friendship is funded by the Karlsruhe Institute of Technology, the Helmholtz Centre for Environmental Research, the Axel Springer Stiftung, and the Freundeskreis des Forschungszentrums Karlsruhe e.V.