DESERVE members from the Ministry of Energy and Mineral Resources (MEMR, Jordan) and the German Research Centre for Geosciences (GFZ, Germany) successfully carried out field measurements at the Ghor Al Haditha sinkhole site in Jordan. The focus of this years’ research was on aerial photography, field observations as well as water sampling.

Aerial photography combined a helium filled Helikite Balloon with a Quadrocopter survey. By doing so, more than twice of the area of 2014 was investigated. The goals are to detect changes in the topography, to detect sinkhole collapse precursors such as small subsidence and submarine features as well as to create a large high resolution digital elevation model (DEM) including the northern part which is the most active sinkhole area.

For a detailed analysis on the role of subsurface water flow in sinkhole formation, a water level and a water sampling analysis have been undertaken. Fortunately, due to stormy weather, sinkhole as well as spring and canyon formation could be directly observed in the mud during the two weeks of field work. All in all, a successful survey with unexpected impressive observations. 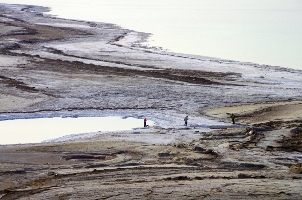 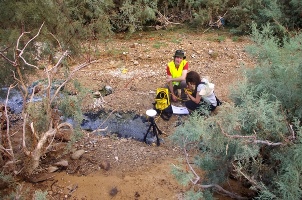 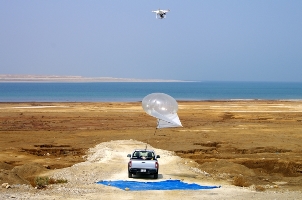